Sometimes our archive receives donations that hint at Lambton County’s connections with the rest of Canada and even extend internationally in scope. The Brown family travel documents are an excellent example.

Floyd Albert Brown lived in Forest from 1893 until his death on March 23, 2009. A native of Windsor, Brown was an intrepid pharmacist who, in his own words, “closed my pharmacy in Windsor [in 1973] and embarked on a two and a half year round the world odyssey with my family to study world pharmacy practices.” Brown’s work rejuvenated his profession and his adventurous spirit took him as far as Egypt, Indonesia and New Zealand. Brown’s obituary in the April 2, 2009 issue of the Forest Standard reads: “Floyd lived a remarkable life as an innovative pharmacist, avid sailor, writer, photographer, gardener and active member of Christ Anglican Church in Forest.”

In 2008, Floyd Brown made an interesting donation to the Lambton Room. Apparently his father George Brown was also bitten by the travel bug, and in 1929 George and his family embarked on a two-month vacation along the Canadian and American west coast. George Brown saved a remarkable amount of material from his trip, including postcards, photographs, CPR schedules and menus, hotel brochures and travel guides. Floyd Brown’s donation to the Lambton Room contained these travel records, and they form a fascinating snapshot of North American travel and tourism. Material comes from locations as varied as Banff, Victoria, Yosemite National Park, San Diego and Tijuana.

Floyd Brown noted in a letter that accompanied his donation, “I am amazed by the quality of the brochures and the passenger service, 80 years ago, provided by many connecting North American Railroads. They were indeed the travel industry of the day.”

Collections of this nature serve several important functions for our county archive. They provide insight into the history of the Brown family and the family’s activities. They communication information about the CPR’s marketing campaigns, scheduling decisions and areas of service in the 1920s. Additionally, they speak to the growth of the travel and tourism industry. Lambton County families have diverse and exciting stories to tell, and those stories open up new avenues that take us in interesting and, in this case, even international directions. Enjoy the scans from the Brown travel collection. 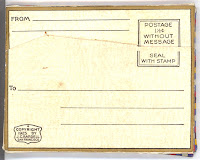